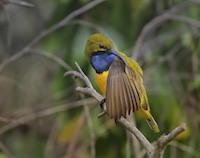 This seems to be the latest in a persistently limp and desperate series of ‘new’ anti-depressants with ‘faster-better’ AD action. Evidence for any usefully novel action or efficacy exists, I suggest, only in fevered and over-optimistic imaginings. As usual these claims are being made with no substantive or replicated evidence, something that has been repeated so frequently over so many years that one wonders how anyone has the effrontery to insult our intelligence in this way again (The answer is, of course, the well-renumerated ‘KOLs’.)

The ‘Lundbeck’ paper (1, 2) states (one can almost feel the naive wide-eyed breathless excitement)

‘Recently, the term multimodal was coined for compounds that combine at least two separate pharmacological modes of action that complement each other in terms of efficacy … 5-HT3 receptors … blockade i) increases pyramidal neuron activity by removing 5-HT3 receptor-mediated excitation of GABA interneurons, and ii) augments SSRI effects on extracellular 5-HT.’

It is not worth expending time and effort discussing this, or similar, drugs because many have been developed and they have all disappeared into the abyss, usually without any papers about their clinical use being published. That is because they have all failed to show useful effects. I have discussed this aspect of the failure of drugs that are supposed to act at ‘modulatory’ presynaptic receptors in another commentary which outlines the (fairy) story of mianserin, mirtazapine and the ‘serenics’.

For readers who do not understand the history of the development of psychotropic drugs*** it is appropriate to put this in context. Drug companies are experiencing considerable consternation about the fact that there are no genuinely new antidepressant drugs in development (3) and many companies have backed away from this field of research for lack of useful or novel ideas. Those that are left seem to be people with greater degrees of either naiveté or optimism, or both.

This saga keeps repeating itself like a nightmare: it represents the triumph of hope over experience. If the consequences of this were merely on the employees (directors and shareholders) of the company, that would hardly matter. Unfortunately, it represents a cruel deception for those suffering from serious depressive illness.

*** Remember Santayana: ‘those who cannot remember history are condemned forever to repeat it’.